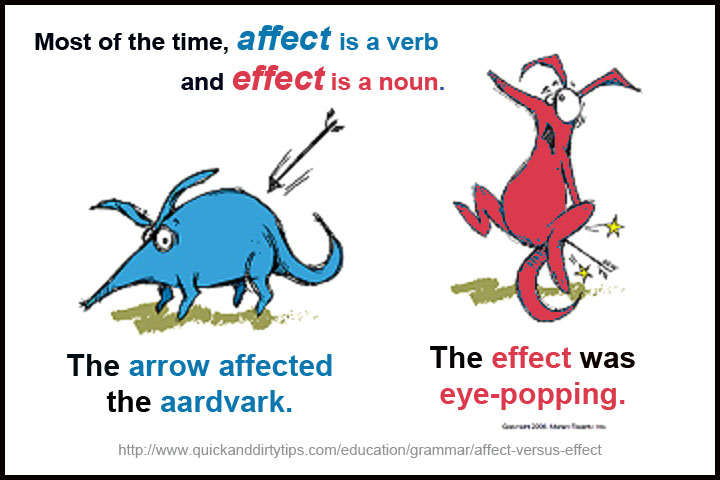 If you do a search for “most common grammar errors,” the affect/effect duo is going to turn up.

These two words are homophones. That means they sound alike. Well, they’re almost homophones; though not identical, they sound very much alike. We can see the difference in their spellings, but we don’t always hear it when they’re spoken aloud. That’s probably how they came to be mixed up in the first place. They rank high on the list of what I call “mixed-up words.”

But affect and effect have very different meanings. Your writing will be better when you nail down those differences and learn how to use these words.

Affect is a verb meaning “to have influence upon”:

The movie affected me tremendously: I couldn’t stop crying all night.

Effect is a noun meaning result:

Nonstop crying was the effect the movie produced.

Those are the most common meanings of affect and effect.

But that’s not all there is.

Effect is a verb with a specialized use. It means “bring about,” and it’s almost always followed by the words “a change”:

The freshman senator hoped to effect a change with her new resolution.

Affect as a verb also has another meaning, and that is “feign” or “put on”:

The contestant affects an attitude of snobbery, but this is a cover for his extreme shyness.

Affect is also a noun used in a specialized way, as a psychological term:

The patient’s affect indicated he was deeply depressed.

Using the wrong homophone can affect meaning and result in the wrong effect.

Now you’re equipped to produce the right effect! If you keep the most common uses of these words in your back pocket­—affect as a verb meaning influence and effect as a noun meaning result—then you’ll get them right when you write.