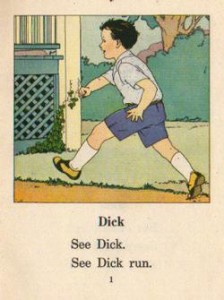 Dick and Jane, the children’s book characters who taught an estimated 85 million children from the 1930s through the 1960s how to read, are back in print, and nostalgia-crazed baby boomers are scooping up the titles as fast as they are being released.

Since fall, when the titles first became available to bookstores nationwide, 4 million copies have been shipped.

Dick and Jane appeared in 1927. They were the creation of Zerna Sharp, a consultant for publisher Scott Foresman.

Sharp believed children would read better if they identified with the characters in the illustrations and read words that sounded familiar.

By the 1950s, an estimated 80 percent of U.S. first-graders who were learning to read were doing it with Dick and Jane.

Of course, in Dick and Jane, everyone speaks simply. The idea was to teach children how to read using the “whole word” method, based on recognizing words by sight, instead of sounding them out, letter by letter.

Jane is the blond second banana in the brother-sister act. Jane is almost too good to be true; she never cries or sulks.

The rest of the family includes Sally, a silly, unpredictable 3-year-old; fun-loving Spot, who started as a black-and-white terrier and turned into a cocker spaniel in 1936, when spaniels became popular; Puff, Jane and Sally’s rambunctious orange kitten, who by 1960 was going for rides on Mother’s modern vacuum cleaner and watching other cats on TV; Tim, Sally’s teddy bear sidekick; Father, trim, soft-spoken, handsome, and Mother, smart, gracious, a model mother, wife and homemaker.

Father and Mother are just that, and the family’s last name is never revealed.

By the late ‘60s, though, Dick and Jane’s days were numbered. Educators wanted children’s books reflecting all kinds of kids, not just white, middle-class ones.

Scott Foresman dropped the series in 1970, and Dick and Jane lay dormant until a book buyer for Wal-Mart and officials within Penguin Young Readers Group, which acquired Scott Foresman in 1996, started talking up the concept again.