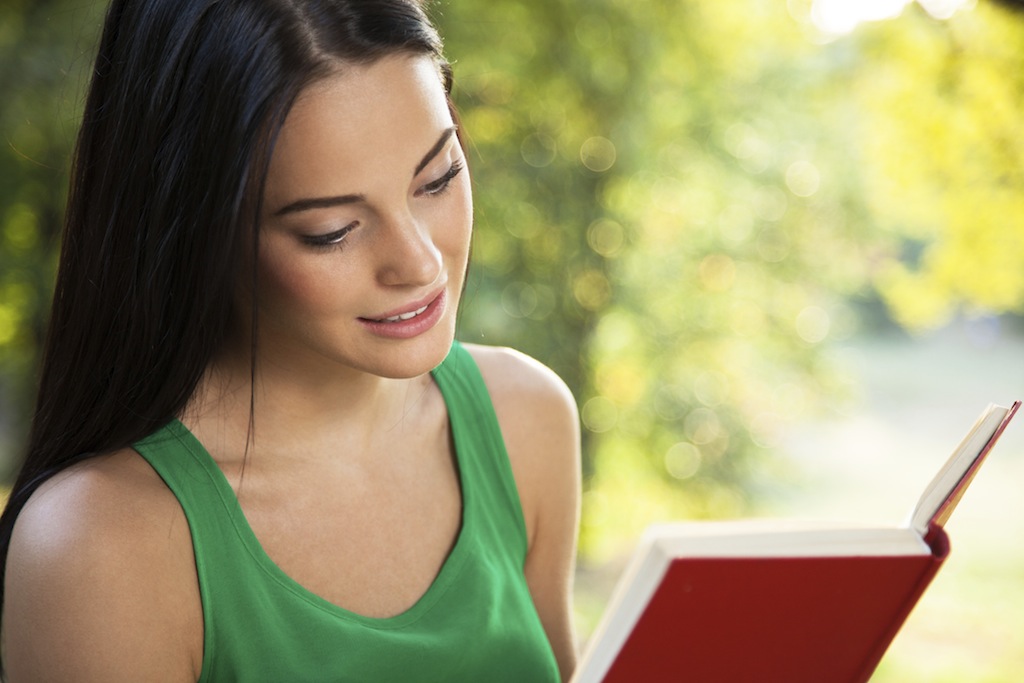 Have you always wanted to write a novel, but didn’t quite know how to get started? Or perhaps you had an idea-—maybe even a dream—that inspired you. You sat down to write, began typing with passion, but then got stuck. Sound familiar?

If so, it’s not surprising. That’s happened to nearly all authors, especially when they’re first getting started.

Fortunately there’s a great solution! The trick is to figure out the structure of your novel before you even start typing. That makes finishing so much easier.

In this post I’ll explain the single most important step to structuring your story. It’s a basic concept that makes it incredibly easy to create exciting, effective fiction. Best of all, it makes it much easier to finish everything you start.

What is this step? It’s simply understanding the essential difference between plot and story.

We tend to use the words plot and story interchangeably, don’t we? It’s easy to think of them as the same thing. In fact, I bet most writers, editors, and other professionals in the world of fiction don’t clearly understand the distinction. Yet it’s very simple, and grasping it will make everything you write so much easier that you’ll be shocked. Here’s the difference:

•   Plot is your protagonist’s physical journey.

•   Story is your protagonist’s emotional journey.

Your novel (or short story, play, or screenplay) will contain both. The plot will be what happens to your protagonist; the story will be how your protagonist changes inside.

Simple, isn’t it? And yet by keeping these two words separate and carefully using them only when we mean the physical (plot) or the emotional (story), we can bring a whole new level of clarity to everything we write.

Another way to think of plot and story is in terms of action and reaction. Some action happens (plot), and your character reacts to it (story). In fact, a novel is nothing more than a repeating series of actions and reactions. Other than a little bit of setting, dialogue, and weather, there’s nothing else to it!

•   The plot moves your character from her starting location to her ending location. There may be many struggles along the way, and the physical part of those is the plot.

•   The story moves your character from the person she was at the beginning to the person she ends up being at the end. There may be many struggles along the way, and the emotional part of those is the story.

Now that you understand this, it’s easy to see how you can use plot and story continuously throughout your novel. Plot is action, so if things are dragging, simply add more of it. But if things are moving too fast, add more story to slow them down. They work together to keep your novel on pace.

If you understand the difference between story and plot, you will have one of the most powerful weapons in your writing arsenal. It is astonishing how many successful authors don’t grasp the difference. Sure, some of them apply them intuitively without knowing they’re doing it, but plenty more don’t, and their work shows it.

Plot and Story in The Wizard of Oz

I’ll use The Wizard of Oz movie as an example, because almost everyone has seen it. It’s easy to name lots of plot elements in The Wizard of Oz: A tornado picks up a house and drops it on a witch, a little girl meets some interesting traveling companions, a wizard sends them on a mission, and they melt a witch with a bucket of water. Emotional content: zero.

It’s harder to find the story elements, but when you do, you realize they’re what makes The Wizard of Oz a timeless, movie classic: Dorothy’s sorrow when Toto is taken from her, the distress she feels when she realizes her house has landed on a witch, her fear of both the witch and the wizard, her sadness at having to leave her new friends, and—most important—the moment when she discovers the story’s theme that she has the power to solve her own problems.

Each of these vital story elements is an emotional reaction to a plot element. The constant resonance between story and plot creates the dramatic tension you’ll need to maintain throughout your story. This is what keeps readers on the edge of their seats. Without an emotional reaction, a plot development will have no effect on your readers. And without plot developments, your characters—and your readers—will have no motivation.

So when you devise your story, think of it first in emotional terms. What are your characters feeling? What are they thinking? What are their inner struggles? Emotional impact, after all, is the only thing that really counts.

But don’t stop there. Story cannot exist without plot to carry it on its way. How will you show what your characters feel? What will express their thoughts? What will reveal their inner struggles?

As you develop the plot, remember to test every moment of physical action for its emotional value. If an event ends up having little or no emotional value, then you should find something better.

For example, suppose one of the farmhands encountered Dorothy as she was running away from home. He could try to stop her, or perhaps he could become a co-conspirator, promising not to tell Auntie Em. Either way, what would this contribute to the emotional story? It doesn’t illuminate Dorothy’s character in any way. And although we might learn something about the farmhand, he doesn’t appear again until the last minute of the film. This plot development contributes nothing emotionally. Let’s cut it.

You Can Write Better Than This

It’s astonishing how much mainstream fiction lacks a story. This is particularly true of Hollywood movies, but we can easily find the problem on television and in the bookstore as well.

A great example is Michael Crichton. No one can dispute that this best-selling author can spin an exciting yarn. But there is almost no character development in any of his books. I recently listened to The Lost World as an audiobook on my commute to work. I was appalled by the two-dimensionality of all the characters. They marched like puppets through the dinosaur-populated jungle. How could any reader possibly relate to these cardboard cutouts? Why should I care if they were eaten? They were little more than names to me.

Every James Bond movie begins with some spectacular stunt. In one, Bond and Jaws plunge from an airplane with only one parachute between them. After a dramatic midair struggle, Bond ends up with the parachute, and Jaws ends up as tomato soup.

It’s an exciting way to start a movie. The problem is, it’s completely uninteresting from an emotional standpoint. We haven’t even met Bond’s character yet in the movie. And if we had, we’d find him shallow (unlike the books, where he is more fully developed). Unless we have good memories, we may not even recall who Jaws is from the previous movie.

The problem is that the scene is all plot, no story.

If it were a novel, perhaps we could get inside Bond’s head. We could hear him thinking, “If I die I won’t be able to save the damsel in distress, won’t be able to taunt Miss Moneypenny, won’t ever finish what I’ve started.” Those regrets are the story, but they’re missing in the movie.
Admittedly, the problem is more severe in movies because there is no interior dialogue—we can’t hear the character’s thoughts. But it also exists in books, because we can’t spend all our time in the character’s head. And we can’t just tell our readers that our character is sad. Instead, we must show the story to our readers through the character’s actions.

When tears stream down the character’s face, we are revealing story (emotion) through plot (action). Readers will be moved by the story, not the plot. And they will remember the experience and want to repeat it.

On the other hand, a plot device—no matter how spectacular—is only spectacular the first time we encounter it. That’s why each Bond flick needs to start with a stunt more spectacular than the last.

Of course, in a novel we could make the opposite mistake, spending all our time in the character’s head, with nothing exciting happening in the physical world. A lot of Stephanie Meyer’s Twilight books suffer from this problem.

It may surprise you to discover that plot comes second. What I mean is that it’s much easier to construct a solid story and then add plot details that make sense than it is to construct a series of events and then try to find rational reasons why people would behave that way. After all, some action we could dream up might have no logical explanation at all, and then we’d be stuck! In Novel Writing Workshop I show you how to first construct a terrific story, and then add the plot. When you’re done you’ll have a perfect balance between plot and story.

Using Plot and Story in Your Own Novel

Now That You Know the Secret, What’s the Next Step?

The difference between plot and story is essential knowledge for successful writing. Once you understand that, then it’s time to create your main character and send him or her on both a physical and an emotional journey.

Perhaps you’ve heard of three act structure? It was devised thousands of years ago, for Greek drama, and it’s used in almost every successful novel and movie, right up until today.

But there’s an even easier way to break your story into bite-size manageable pieces. I call it my “checkpoints of story structure.” Using these, it’s easy to stay on track, and balance your protagonist’s physical and emotional journey by alternating between plot and story.

In my Novel Writing Workshop I’ll show you these techniques and many more. And we’ll return often to the concept that plot is physical, story is emotional. It’s the most essential thing you need to know about writing fiction.

If you’ve already started you novel, Novel Writing Workshop will show you techniques you can apply to your existing material that will, frankly, amaze you. For example, I’ll show you how to divide up your novel into 200 or so short pairs of action and reaction called “scene and sequel” that make it easy to balance plot and story. You can even use “scene and sequel” to control the pacing of your novel. And with such a simple plan laid out before you, your success is almost guaranteed.

And if you haven’t yet started a novel, congratulations! You’re in the ideal position, because you can start with a clean slate and put together a perfect plan. That will save you an incredible amount of time—and several major revisions.

See You in Class!