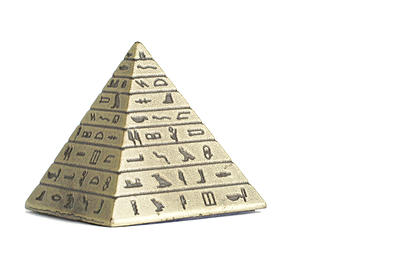 Build your characters like a pyramid, viewed from above. Your readers should focus first on your protagonist, who is at the top of the pyramid. Develop a multi-page character sketch for the protagonist before you write anything else. Be sure to include the protagonist’s flaw, because overcoming that flaw to solve a problem is what all stories are about.

Your antagonist is the next layer down. You should know your antagonist almost as well as your protagonist — but not everything you, as the author, know will necessarily end up in the manuscript. You’ll draw upon it as you need it.

The next layer down consists of the helpers of the protagonist and the other members of the opposition. These characters need less detail, but should still have their own goals, flaws and backstories.

Finally, there is the base of the pyramid. In a movie, these would be called “extras.” You don’t need to know very much about these characters, because they have very minor roles, and may not speak at all.

If you focus your efforts on this hierarchy your readers will focus their attention accordingly, which is exactly what you want.

For more writing tips, order my book, How to Fix Your Novel, from Amazon.com.